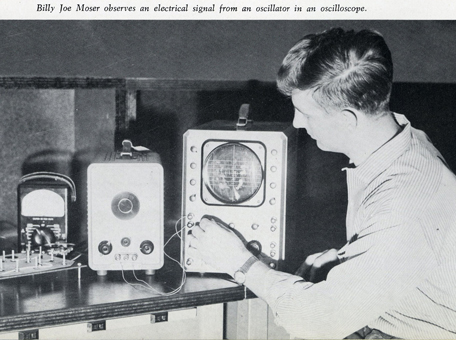 Students in Charlotte could take introductory courses in math, science, English, history and other subjects, as well as prerequisite courses in engineering and technology disciplines. They could transfer the courses to other universities, or use them to complete an associate’s degree from Charlotte College. Under the leadership of founder Bonnie Cone, a two-year associate’s degree technology program was established for educating engineering technicians.

A series of evening classes was offered by North Carolina State University in cooperation with Charlotte College, which led to a certificate in industrial engineering. Completion of the certificate program also prepared students to transfer to N.C. State for their junior and senior years in engineering.

One of the many students who took advantage of engineering classes in Charlotte was Sam Bell, who in 1959 and 1960 earned the associate’s degree that led to his further engineering studies and a 30-plus-year career as an energy engineer. Born in February of 1938, Bell graduated from Harding High School in Charlotte and then went into the U.S. Navy before enrolling at Charlotte College. 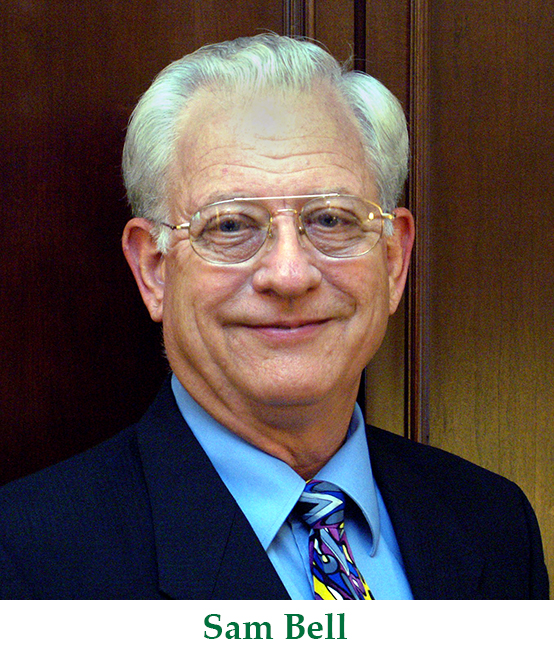 “I actually found out I could get out of the Navy two months early if I went to college,” Bell said, “which was one of the motivations for going to school. Another motivation was the engineering curriculum at that time didn’t require a foreign language and I had never been able to pass Spanish.”

The draw of doing his first two years of study at Charlotte College was the economics. “I didn’t have a dime,” Bell said. “I came out of the Navy with nothing.”

Almost all of the Charlotte College students worked during the day, he said. “It was tough time for a lot of folks. I worked for an accounting firm in town, running a printing press for them in the mornings and then going to school at night. They were real nice to me and let me work around my school schedule. If it hadn’t been for that job, I don’t know what I would have done.”

Of the 500 or so students attending Charlotte College at that time, about 200 were studying engineering. Classes began at 4 p.m. and went to 10 p.m. Much of the curriculum was basic math, chemistry, physics and English. Most of the engineering courses taught were electrical, with little civil or mechanical engineering offered.

“I wanted to go into power and was convinced I was going to be a utility engineer,” Bell said. “There were a lot of courses designed around utilities like electrical machinery and transformers. And we did have electrical labs with motors and stuff like that.”

In terms of facilities, Charlotte College was essentially the basement of Central High School in Charlotte. The first little office, just inside the door to this basement, was the office of college president Bonnie Cone.

“Every afternoon you had to walk by her office and she’d wave,” Bell said. “She was very personable and knew all the students by name. For years after I graduated she sent me a Christmas card. She was quite a lady.” 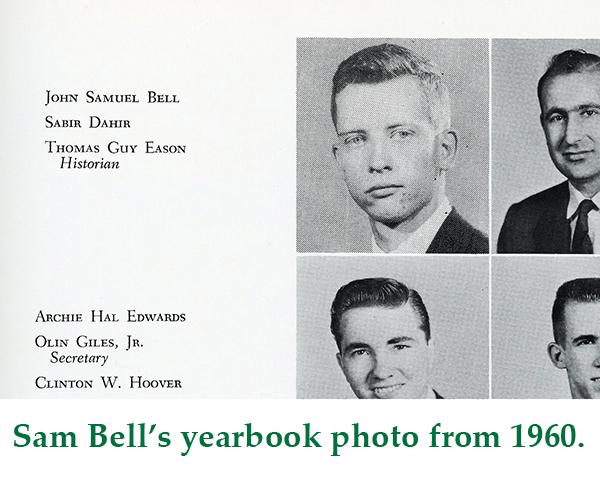 Charlotte College was just starting to make plans to have its own campus when Bell was there. “A friend of mine called me one day and said ‘Hey, let’s take a trip.’ I said ‘where do you want to go?’ He said ‘They just bought a whole bunch of property for the new Charlotte College. Get your .22 and let’s go out there and do some shooting.’ So we took a couple .22s and went out in the middle of this field. There was an old barn out there, which was the only structure within miles. There wasn’t anything else to shoot at, so we had a lot of fun shooting up that old barn.”

With his associate’s degree from Charlotte College, Bell had the freshman and sophomore courses needed to transfer into North Carolina State as a junior. He continued his electrical studies at N.C. State with the goal of being a power engineer.

“In those days you were either a power engineer or electronics engineer. I do remember one class where a professor told us he was going to go over some stuff that wouldn’t be on the exam, but he thought it was important that we know about it. It was transistors.”

Bell succeeded in his goal of becoming a power engineer, working for 30 years at Florida Power and Light. Towards the end of his career at FP&L he was president of a subsidiary that built renewable power sources such as solar, geothermal and wind mills. After retiring from FP&L, he wound up in Tallahassee running the municipal utilities system of electric, water, natural gas and such for a few years.

The opportunity for engineering students to stay in Charlotte and earn their bachelor’s degree began in 1960, when Charlotte College was approved as an accredited arm of N.C. State’s School of Engineering. This designation allowed students to go beyond first- and second-year courses to take junior-, senior- and graduate-level classes in Charlotte as they earned their degrees from N.C. State. Students did still need to travel to the Raleigh campus on some weekends to complete lab work. 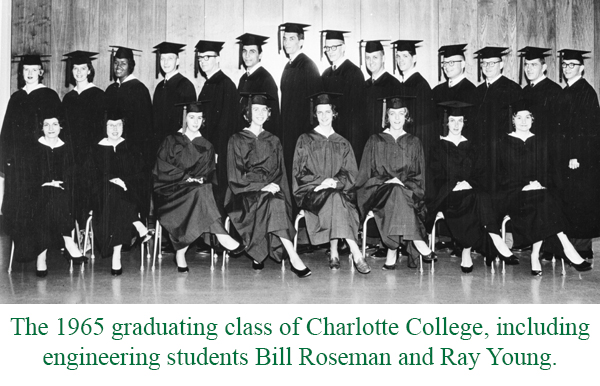 Only three years later in 1963, Charlotte College became a four-year institution. At this point junior- and senior-level classes were added to the two-year associates program, creating full bachelor’s degree programs in mechanical and electrical engineering. Several engineering students who had been working on their N.C. State degrees through the Charlotte extension program then transferred to the new Charlotte College bachelor’s program. Classes were primarily taught at night by practicing professional engineers from the Charlotte area. 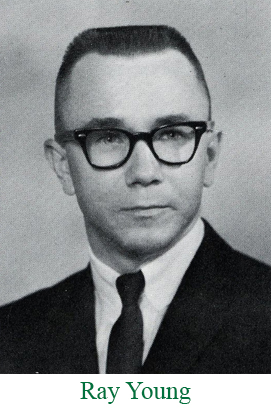 Graduate Ray Young, who had served in the U.S. Air Force, went on to work as an electrical engineer with Collins & Aikman in Charlotte for 30 years. He died September 23, 2001. 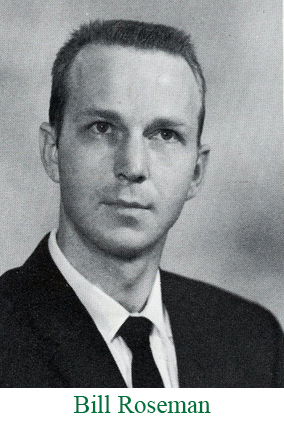 Graduate Bill Roseman had served a tour in the military, had a wife and child, and was working part-time while he was going to school in the 1960s. Born and raised in Lincolnton, North Carolina, Roseman entered the Air Force in 1951. He served a year in Korea and was stationed at Shaw Air Force Base in South Carolina as a ground control approach radar operator. While in the Air Force, he took courses in radar equipment and electronics, and became interested in a career in electrical engineering.

“When I got out of service I returned to North Carolina, got married and was working for Remington-Rand in High Point servicing typewriters,” Roseman said. “I started taking some basic math and English classes at Charlotte College in 1957, so I was commuting back and forth to school in downtown Charlotte. I also took a year of classes at N.C. State, and then when Charlotte College began a four-year bachelor’s program in 1963, I transferred back here to finish.”

The new campus off Highway 49 was open at that time. “I think the whole campus had only four or five buildings then,” Roseman said. “Engineering had a half dozen faculty, and most of the classes were in electronics and some in power.” 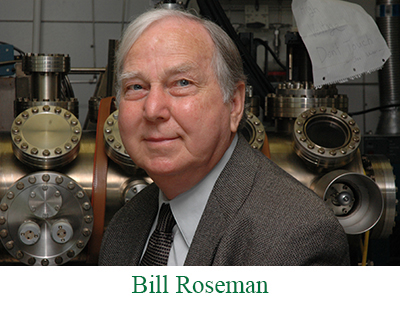 Following his graduation in 1965, Bill went to work for the engineering consulting company HD&R for three years. In 1968, he and three partners joined together to form the company Electrical Consulting Engineering. The Charlotte-based company worked primarily with electric co-ops in North Carolina, South Carolina and Virginia, and also with Duke Power, doing facilities planning and design for electric transmission and distribution systems.