UNC Charlotte researchers have worked in the field of freeform optics for more than 10 years. In that time, numerous advances have been made that are now creating a whole new world of optical applications and fundamentally changing the way optical devices are designed. Undergraduate students, graduate students and alumni from the Lee College of Engineering and the College of Liberal Arts and Sciences are working collaboratively on research and application of these new technologies. UNC Charlotte’s work in freeform optics has produced a steady stream of high-quality senior design projects, graduate student research projects and industrial projects with an estimated total funding of more than $3.5 million. In recent years, freeform optics have become a disruptive technology. They are providing new functionality and are fundamentally changing the way optical devices are designed. 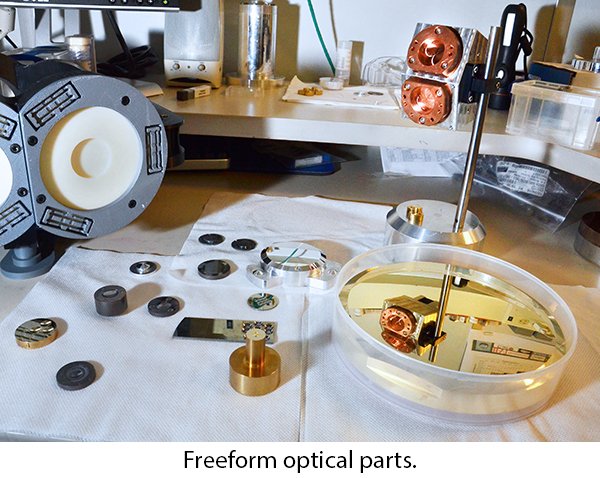 Fundamentally, optics are devices that control and direct light. Conventional optics such as lenses and mirrors are typically composed of flat, spherical or other symmetric shapes. In comparison, freeform optics contain more complex non-symmetrical shapes and that allow optical designers many more degrees of freedom. For example, freeform optics can improve the optical performance and reduce the size of imaging systems (such as cameras and telescopes), and also enable complex light management/non-imaging applications like modern automotive headlights. However, freeform optics are difficult to manufacture and measure because they do not have an axis of symmetry.

“Freeform optics are opening up whole new fields of design,” said Dr. Thomas Suleski, professor of Physics and Optical Science at UNC Charlotte. “Originally designers were thinking in terms of modifying existing designs using freeform optics. Now they are looking at starting from scratch and completely changing the designs of optical systems.”

“Freeform optics presents a new world of design possibilities,” Dr. Suleski said. “This is because you can replace many parts by using just a couple of freeform optics. This makes everything smaller, lighter and more efficient.” 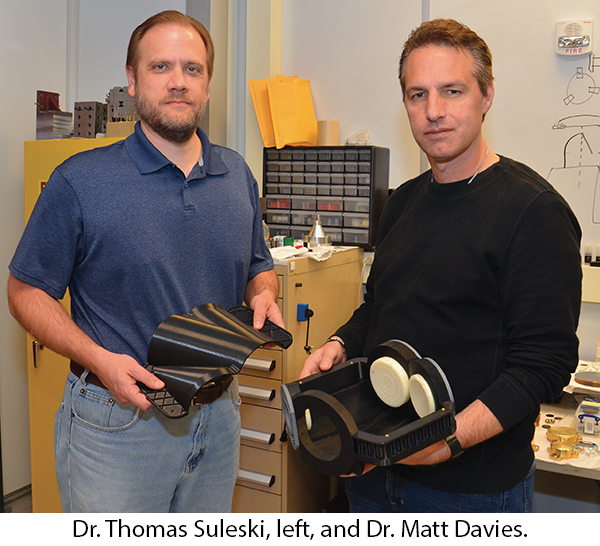 Dr. Matt Davies, a professor of Mechanical Engineering and Engineering Science at UNC Charlotte, has been involved with freeform optics research for years. “We have been one of the pioneers in the manufacturing of freeform optics,” Dr. Davies said. “We have extensive expertise in diamond turning of such parts. We are also one of the first groups to develop techniques for milling freeform parts. We have the capability to use CNC (computer numerically controlled) machines at ultra-precision levels. We are also investigating grinding and polishing technologies for use in making freeform optics in a range of materials.”

Since 2013, UNC Charlotte has been a member of the Center for Freeform Optics (CeFO), a joint venture with the University of Rochester that brings together universities and companies to focus on technologies based on freeform optics. An NSF Industry/University Cooperative Research Center, CeFO has 16 industrial affiliate members. Dr. Davies and Dr. Suleski serve as the Site Directors for CeFO at UNC Charlotte.

“The University of Rochester is internationally recognized for leading research in the design of freeform optics and systems,” Dr. Davies said. “UNC Charlotte has world-class research in the manufacturing and measurement of the types of surfaces required for freeform optics. The combination of the two institutions makes CeFO unique in its ability to design, prototype, measure and test freeform optical systems. What has been fascinating is that on such projects everything keeps evolving as designers learn to communicate with manufacturers and measurement scientists. We learn that if we can make this type of optic, then we can make that other type of optic and that information gets fed back to optical designers who then see new possibilities at the system level. Finally, you have to measure the optics and optical systems you manufacture and put everything together and see if it actually works. If it doesn’t, it’s not always the optics that are wrong, but the assembly, or most likely some combination of both. We have to conduct concurrent engineering of all the elements, streamlining design through manufacturing through measurement and testing to make sure they all work together. It’s a very interesting process.”

By creating lenses and mirrors in a range of shapes, freeform optics and optical systems can be smaller and lighter and can have increased performance. As an example, on one CeFO project involving both universities, the University of Rochester radically re-designed a classical imaging spectrometer – a remote sensing device that produces images like a camera and also separates the spectral bands (or colors) present in the image. This enables, for example, spectroscopic chemical analysis of the source object. The University of Rochester showed that the size of an imaging spectrometer could be reduced by a factor of five by replacing traditional optics with freeforms while maintaining the same optical performance. UNC Charlotte students and faculty were able to produce a prototype system, approximately the size of a baseball, that is now being tested at Rochester. Similar gains are likely for other imaging systems and non-imaging systems. 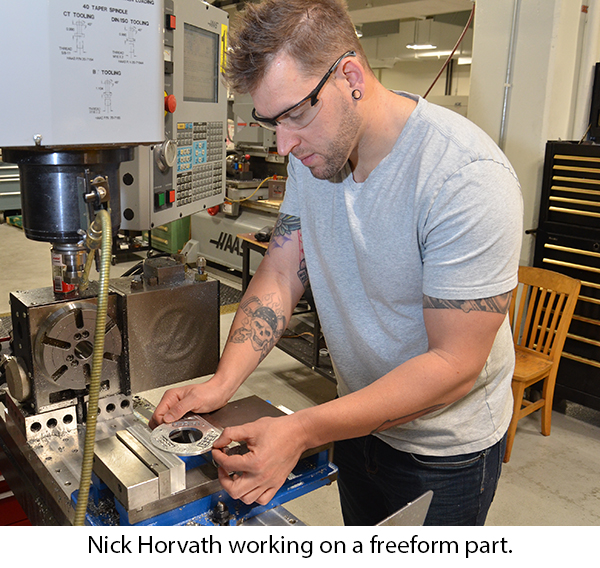 For their senior design project, Mechanical Engineering students Nick Horvath and Isaac Barron are working on a University of Rochester design concept for a telescope that uses freeform optics.

“We’re doing a proof of concept for the optical design provided by University of Rochester,” Barron said. “This includes building and analyzing the three optical elements and the mounts for them. We’re shooting for a semi-monolithic design in order to decrease assembly errors”

Known as a three-mirror anastigmat, the telescope uses three freeform mirrors that reduce the size of the system while maintaining the performance of a larger optical system with axially symmetric optics. The manufacturing of the freeform mirrors and their placement in the assembly must be extremely precise for the telescope to work. Having the expertise UNC Charlotte’s Center for Precision Metrology available has made achieving this precision possible for the project team.

“The telescope doesn’t have multiple adjustments that can be made to it correct errors like a traditional telescope,” Horvath said. “Because of the tight tolerances in the assembly only, only a single adjustment – movement of the image detector – is required to tune the system to near optimal performance.  Designing a deterministic system allows for quantitative optimization, where you can close the loop between image quality and placement, by having a system that is fully measurable once constructed. It has to be correct from the start. Having the resources of the Center for Precision Metrology has been indispensable. We’re cutting all the mounting features, and then we have to make sure they are accurate. So, the metrology is equally important to see if we got it right.” 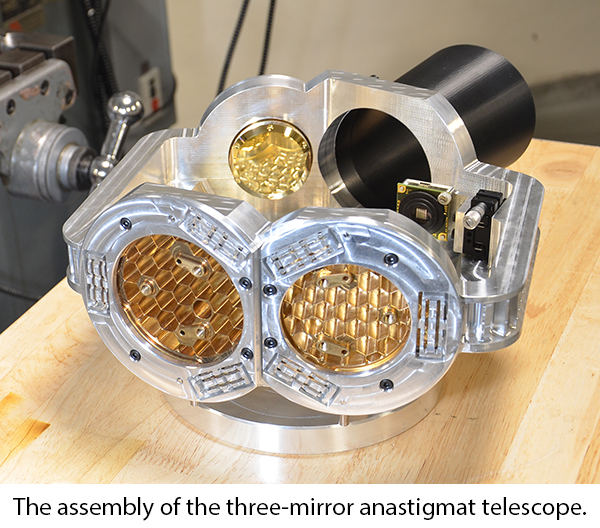 Providing additional optical design expertise for the telescope project is Jason Shultz, who did his undergraduate studies at UNC Charlotte in Mechanical Engineering and is now working on his Ph.D. in Optical Science and Engineering. “I’m doing modeling of the optical systems using optical simulation or ray tracing software,” he said. “The purpose is to understand the effects of positioning errors on the optical performance of the system. By using computational modeling, I can introduce positioning errors and see what the impacts are and determine how ‘out of focus’ the instrument becomes.”

The goal is to have a system that, when assembled, can be adjusted to produce optimal optical performance simply by moving the imaging sensor (known as defocus adjustment). This contrasts with more typical telescope designs where many adjustments are incorporated into the system to account for assembly inaccuracies.

In separate research involving the very difficult measurement of freeform optics, Mechanical Engineering graduate student Todd Noste and his fellow students are using multiple metrology instruments to compare their capabilities and performance, broadening the use of a Stedman Diagram tool so that optical designers can use it to specify and design freeform shapes. They are also looking at the ISO 10110 optical drawing standard's ability to properly characterize freeform optics.

“The shape of freeform optics can be complex and difficult to measure, but some still have to be extremely precise to work as designed,” Noste said. “We don’t know the ‘true’ shape of the part, but we can figure out the uncertainty in what we think the part shape is. In a technique called a Monte Carlo simulation, we combine the uncertainty of thousands of possible measurements, and then we can say ‘we think the part looks like this, with this amount of uncertainty.’ With this information, we can tell the designers what the limitations are in the metrology, so that they can design the parts with tolerances and specifications that we can measure.”
The capabilities of the Center of Precision Metrology’s laboratories makes this multi-measurement approach possible. By taking hundreds of machine error measurements on a variety of metrology machines, Noste can build a computer model to generate the task-specific uncertainty and machine error correction. 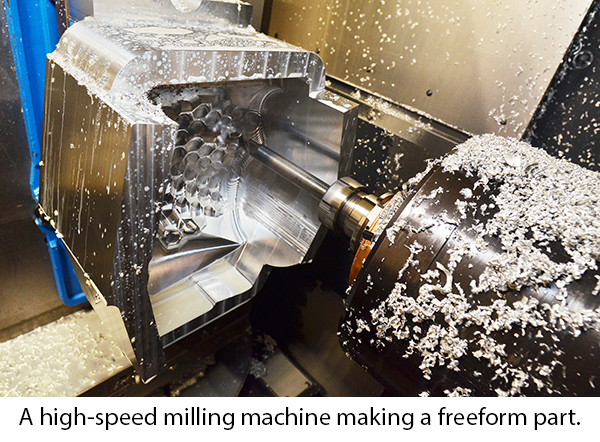 “Working with precise freeform shapes is relatively new in optics,” Noste said. “We’re adapting older technologies to a new application. It’s challenging, but we’re charging forward with the metrology trying to keep up with new designs.”

UNC Charlotte alumnus John Troutman is one of the designers now working in the new world of freeform optics. Troutman earned his B.S. in Mechanical Engineering in 2012 and his Ph.D. in Optical Science and Engineering in 2016. He is now working as a senior mechanical engineer at Aperture Optical Sciences (AOS) in Connecticut. AOS makes optics such as mirrors, mounts, and space telescopes and is a member of the Center for Freeform Optics.

“Most of what I do is design of the tooling,” Troutman said, “and some of the metrology work on the production floor. I’m also involved with some of our work on space telescopes.”

Freeform optics are the key components in most of what AOS does, and they have made the work exciting.

“Freeform is the place to be as far as optics are concerned,” Troutman said. “Spherical optics are figured out. Everything we do here is freeform. And everything here is a challenge. No two parts are the same, so there is always a learning curve. We are all kind of breaking ground together. We’re all learning.”

For more information on the Center for Freeform Optics see https://centerfreeformoptics.org/.