Paying Homage to the Past 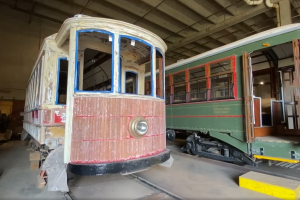 A team of students from the William States Lee College of Engineering are participating in a trolley restoration project. A non-profit organization called Belmont Trolley is working to restore three 100+ year-old trolleys to working condition. Two of them operated in Europe, and one of them operated here in Charlotte in the early 20th century. It ran in Uptown Charlotte until 1938, and many trolleys of the same model serviced textile mills in Belmont during the same period.

Engineering students from UNC Charlotte, led by electrical engineer Nathan Wells who is vice president of Belmont Trolley, are working to give these trolley cars an upgrade. Rather than using diesel generators, electricity will be provided to the cars by a battery-powered system designed by the students.

The Belmont Trolley project is another way the College of Engineering provides pragmatic experiential learning opportunities for students. Likewise, this effort has facilitated even more meaningful connections between the University and the Charlotte region - helping students learn the value of the community’s history, and helping the community learn the value of the students.

The students’ goal is to preserve the trolleys, but Belmont Trolley is also hoping to boost the local economy by developing them as a tourist attraction. The trolley service is expected to be operational by the end of 2023 and will offer weekend service, running from downtown Belmont to Belmont Abbey College on their original tracks.