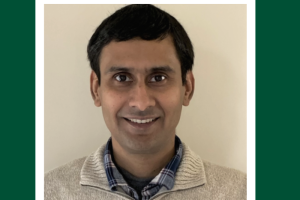 Monday, May 16, 2022
Muralikrishnan’s research is leading what’s next in international standards.

Dr. Bala Muralikrishnan, College of Engineering alumnus, has been named a 2021 Arthur S. Flemming Award recipient. The National Institute of Standards and Technology (“NIST”), in the U.S. Department of Commerce, nominated Dr. Muralikrishnan to be recognized for his outstanding service in the federal government.

“Developing objective standards that are used consistently across the globe create a strong infrastructure of shared practices and trust as we move forward into the next generation of engineering. Bala is creating that trust structure for future advancements.”

Muralikrishnan is recognized for developing sophisticated mathematical models that help mitigate error in measuring systems. His work provides more objective international standards and test methods. This is especially applicable in advanced manufacturing, forensics science, and other areas where rapid, micrometer accuracy is critical.

For example, the scanning technologies Muralikrishnan standardized are used to monitor and inspect buildings, bridges, and other critical infrastructure due to age or damage.  These standards are also used to document accidents and crime scenes, including the Champlain Towers collapse site in Surfside, Fla.

“Dr. Muralikrishnan exhibited his passion and dedication for precision metrology as I oversaw his work in the Mechanical Engineering Ph.D. program at the Center for Precision Metrology,” said Dr. Jay Raja, Senior Associate Provost for Academic Affairs at UNC Charlotte and Mechanical Engineering Professor for the William States Lee College of Engineering. “Developing objective standards that are used consistently across the globe create a strong infrastructure of shared practices and trust as we move forward into the next generation of engineering. Bala is creating that trust structure for future advancements.”

Muralikrishnan earned his master’s and doctorate degree by focusing his work in the college’s Center for Precision Metrology, the only proven university center of its kind in the Americas. The Center has earned recognition as precision metrology experts among the international manufacturing community as well as government organizations.

Muralikrishnan, along with his fellow award winners, will be honored at an in-person ceremony in early June.

Established in 1948, the Flemming Awards honor outstanding federal employees. Recognized by the president of the United States, agency heads and the private sector, the winners are selected from all areas of the federal service.  George Washington University is the awarding organization.