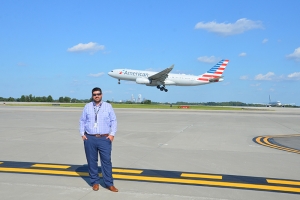 At the recent Airport Engineering Onsite Seminar, Lee College of Engineering alumnus Ashton Watson was a speaker/panelist for a technical sessions and led a tour of Charlotte Douglas International Airport’s ongoing $2-billion capital project. Below is a story about Watson and his role as airport’s lead engineer on the project.

As the lead engineer on a $2-billion airport improvement project, UNC Charlotte alumnus Ashton Watson is involved in all types of engineering, on all types of capital jobs, with all types of stakeholders. And he’s having a ball doing it.

The airport is a department of the City of Charlotte, where Watson first worked as a co-op student in the Department of Transportation. When he graduated with his bachelor’s in 2006, he started working full time for the DOT.

“The DOT was a great experience. I kind of grew up there,” Watson said. “They were very supportive of me while I was working on my masters, getting married and starting a family. I learned a ton about engineering and working in the professional world.” 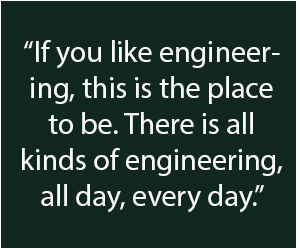 After eight years with CDOT, Watson went to work in 2013 as a project manager at the airport. “Coming here was an opportunity to work on a project of monumental scope,” he said. “If you like engineering, this is the place to be. There is all kinds of engineering, all day, every day.”

Work involved in the “Destination CLT” project includes improving arrival and departure roads, building new parking decks, terminal expansions, and the addition and improvement of runways, taxiways and aprons. The engineering involved includes structural, geotechnical, transportation, environmental, hydraulics, mechanical, electrical, pavements, architectural, computer and aeronautical. On top of all this is the logistics and management of doing the work at the United States’ fifth busiest airport.

“We have 47 million passengers a year. That’s almost a million a week,” Watson said. “We are the second largest hub for the world’s largest airline, which is American Airlines. We have 30,000 employees here every day. Our economic impact on the Charlotte region is estimated at $16.2 billion a year.”

For “Destination CLT,” the number of stakeholders involved in planning and construction meetings is diverse and large. Besides the airport team, other groups at the table include the FAA, TSA, American Airlines, all contractors and subcontractors, the City, and representatives of airport tenants such as restaurants and shops. And one of the key players in the project is the Airport Business Office.

“There is a whole business side to this that is very interesting,” Watson said. “The airport is a self-sustaining entity and not supported with tax money.”

Work completed to date includes several new parking decks, roadway improvements, and the 230,000-square-foot expansion of Concourse A, which also involved an airway apron expansion. The apron work included the airport using one of its two concrete plants to add 40 acres of concrete to the airway. 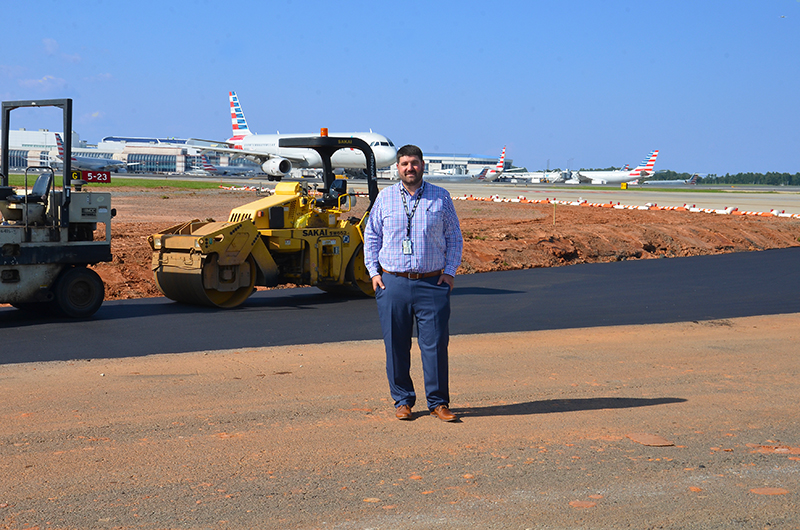 When the arrival/departure roadway project is completed in the next year, work will begin on a 400,000-square-foot expansion of the main terminal. The terminal expansion accounts for $500 million of overall $2-billion “Destination CLT” project. Pedestrian access to the expanded terminal will be improved with tunnels and elevated skywalks from parking decks.

(More details about the scope of work can be viewed in the attached presentation that Watson made at a recent ASCE meeting.)

Complicating all of the work is that it must be done amongst an operating airport. “It would be much easier if we were building the airport from scratch,” Watson said. “We try to have minimal impact on the flight schedule, which means doing a lot of work at night. Which means sometimes I get phone calls at 2 am.”

The complexity of bringing all of the many elements together is what makes the work exciting, Watson said. “I’m using my foundation in engineering to make decisions. I think the education I got at UNC Charlotte has prepared me well for this. Of course the curriculum was important for the engineering aspect of the work, but also the other things I learned from my involvement in ASCE, ITE, the Leadership Academy and other campus experiences has been very valuable. It’s a culmination of all the things coming together.

“I’m honored I’ve been chosen to do this work. With so many things involved, there’s a very different environment here. And I get to be working daily at an active airfield. It’s pretty cool.”